Welcome, one and all, to the last newsletter of 2022! I don't know about you, but for me, this year has absolutely flown by. So much has happened—I got a new job, got married, published my first book, finished writing my second book, started writing my third book...

In all, things are going well, but it's been a whirlwind. Looking back at last December's newsletter, it's surprising how different my life is from the end of 2021. I'm a part of so many more online writing communities, which I love hanging out in, and which I credit to one particular change around here: this newsletter is going out to 10x more people than it was last year.

So...that's pretty cool. Welcome, everyone. Thanks for joining me on this adventure. I'm glad to have you here, but I must say...I do put a lot more pressure on myself to make sure these newsletters are valuable than I once did. With that in mind, I'd love to know if you have preferences about what I include. These updates are for you, after all, so tell me what you want to be kept updated on, and I'll do my best.

Here's an anonymous form you can use to let me know what you want to see more or less of:

That's your grip on the wheel that turns this ship, so I hope you'll put it to good use and not use it to dash us on the rocks. 😉

Now, on to our regularly scheduled programming.

This year for NaNo, I started writing Sibling Suns 2, the untitled first draft of the sequel to An Ocean of Others. The traditional NaNoWriMo goal is to write 50,000 words. How did I do?

You see, things were going so well until the end of the month. That's when a little bugbear called Grave of the Waiting reared its ugly head and demanded my attention. I knew it would happen, and I gave Grave a full six days of my focus—a full 20% of November. Even then, I was still editing the chapter released on Dec. 1 until late the night before.

I got the chapter out the door on time (let's ignore that there are still a number of unfinished items on my release checklist...), but it did eat into a lot of my writing time for Sibling Suns 2. Still, I wrote every day, which was my only true goal this year. And I finished the month with 35,038 words, my best writing month ever.

If you remember last month, I said I was going to keep track of my progress in this Twitter thread:

You may also remember the secret formula I included in the original tweet. This secret formula is not the recipe for Krabby Patties, no no. It is the key to determining how many newsletter subscribers are going to win a signed copy of An Ocean of Others.

That's right, this was a giveaway all along

Unfortunately, I do have to restrict this one to US residents only, but to enter all you have to do is reply to this email to let me know you'd like to enter. Please enter by December 25, 2022. Winners will be announced in the January 4, 2023 newsletter. Good luck everyone!

All right, to close things out I just wanted to let you know where my thinking is at regarding Sibling Suns 2.

35,000 words sounds like a lot, and in one sense, it is. It's a quarter of the length of An Ocean of Others, whose wordcount is around 135k. I originally imagined Sibling Suns 2 being of a similar length, potentially 10k words longer. However, 35k words only got me to the end of Part 1 of Grim's POV.

If you've read An Ocean of Others, you'll know that the entire story is told from Grim's POV. The sequel, however, will be told from three POVs, and I've chosen to tackle that by writing each character's story all the way through before moving on to the next. If 35k only got me through one third of one third of the story, assuming all parts are equal in length, I'd be looking at a 300k+ word book.

Let's not get too crazy. I'm not expecting the story to be that long for reasons I won't go into now. But in light of how long the first third of Grim's story is, I am revising my estimated word count from around 135-145k to 180k-200k for now. We'll see if that holds, or if the other character's stories will grow in the telling as well.

That's it from me for this month. I hope you have a restful and rejuvenating end to your year, and I'll see you in 2023. As always, thanks for reading!

P.S. My team's quarterfinalists in the Self-Published Science Fiction Competition have been announced. We had an incredible list of sci-fi books to read in the slush phase, and we've narrowed it down to a worthy seven. Check out the list and read our comments on ScienceFiction.news 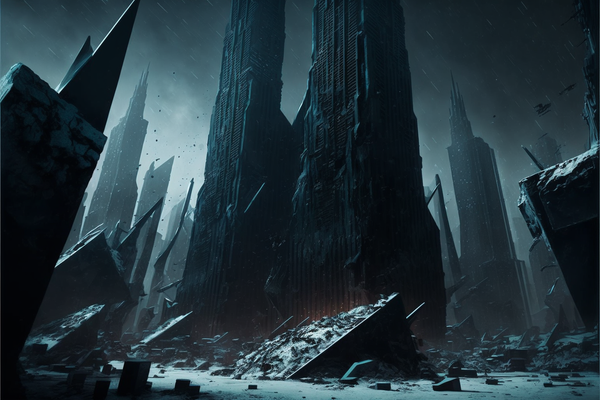 Ada nearly let herself fall when she stubbed her toe on the first of the buildings sticking out from the ice. 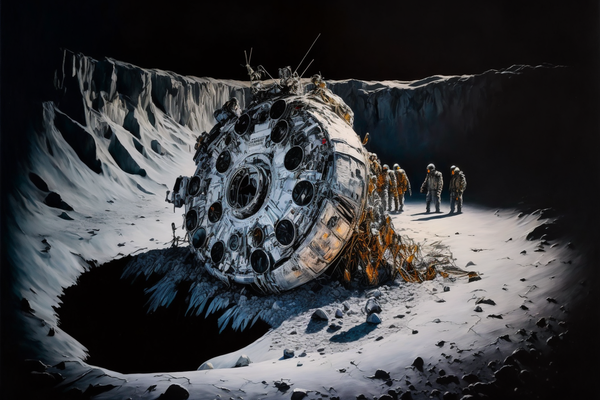 They were in a crater of ice. Above those white walls, the sky held no color, just black and the pinprick lights of stars.